AMD officially held its RX6000 graphics card launch event on 28th. AMD followers had long been waiting for the unveiling of the RDNA2 graphics card. The performance of the new card is very explosive, and the official PPT shows that the new card is even better than the rival products, and the price is very competitive and cost effective. In addition to performance and price, AMD also announced a number of new technology, full of real stuffs. Now, let's take a look at the details of the event. 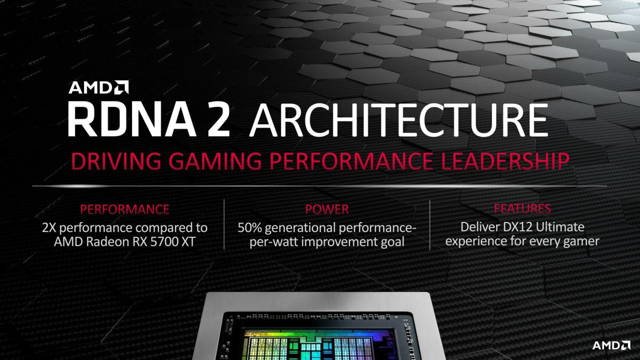 Interestingly, AMD also said that the growth in graphics performance is entirely due to the improved architecture, and that the new graphics chips are virtually identical in craft to the previous generation. In this sense, RDNA 2 is a breakthrough game architecture that will finally give AMD the ability to go head-to-head with NVIDIA.

The launched cards are all from Navi 21 core, let's take a look at each one, starting with the flagship. 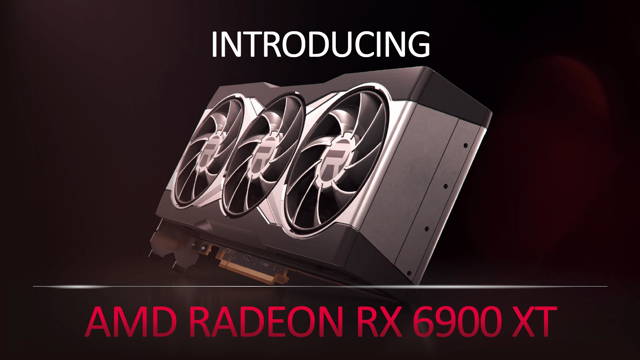 The RX 6900 XT has 5,120 stream processors, that's twice as much as the previous generation, the RX5700 XT. As a rule of thumb, such a scale would almost double the performance, regardless of the frequency of the architecture, so there's a core of 26.8 billion transistors, a super core.

Video memory is the biggest highlight of A card this time, as much as 16GB, although it is still GDDR6 video memory but the frequency has been raised to 16Gbps. But uses a single GDDR6 video memory of 2GB, the bus width is only 256bit, the same as RX 5700 series, so will the bandwidth limit the display card performance play? High resolution games are bandwidth-hungry.

This time, AMD has introduced Infinity Cache, to put it simply, it adds 128MB of independent cache on the GPU just like the CPU, which completely breaks through the limitation of bandwidth on performance.

More interestingly, the thermal design power of the TBP card is 300W, which is much lower than RTX 3090. 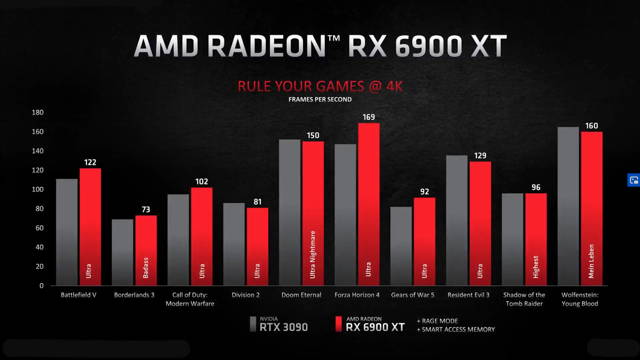 The number of sub-flagship RX 6800 XT stream processors is also up to 4,608. Interestingly, this number is the same as the RTX 2080 Ti, although the performance of the two is no longer at the same level. Other aspects 6800 XT and 6900 XT are basically the same, even TBP, it seems that the performance difference between the two graphics cards is not too big. 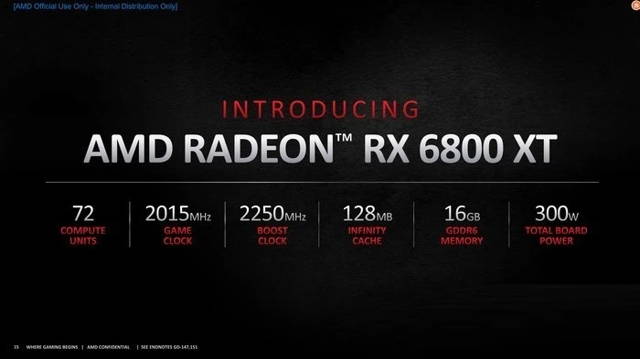 Considering the price, it is obvious that the RX 6800 XT is the main force of sale. 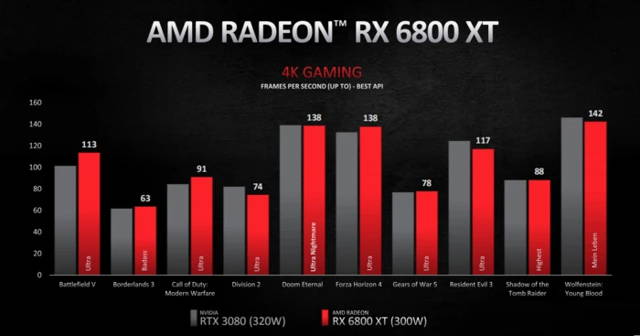 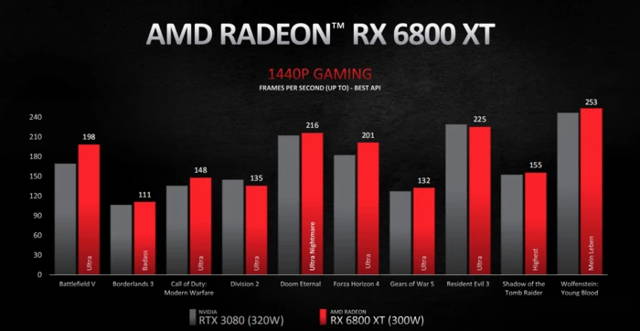 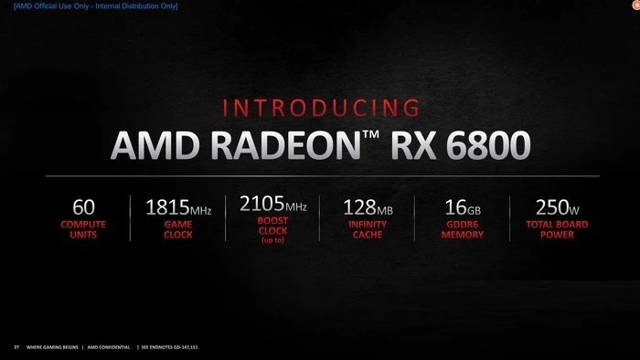 The RX 6800 has 3,840 stream processors and Navi21 cores, but a quarter of the stream processors have been cut. In terms of performance, compared with NVIDIA's previous flagship, the card has an obvious gap of 10% to 15%, while the performance of the 3070 is lower than the RTX 2080 Ti, which seems to be a complete victory over the RTX 3070. 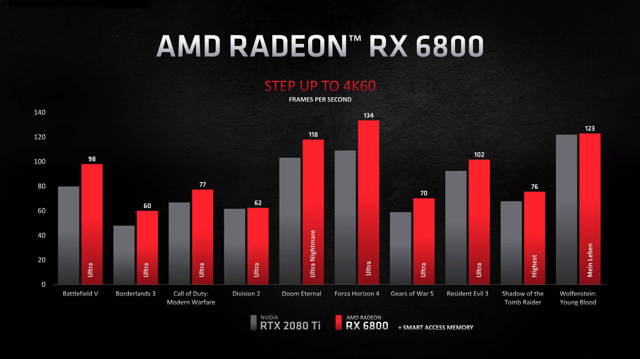 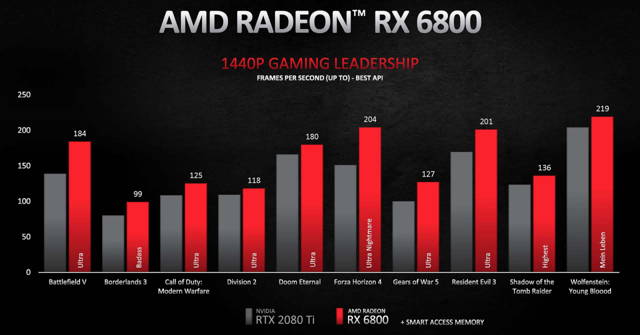 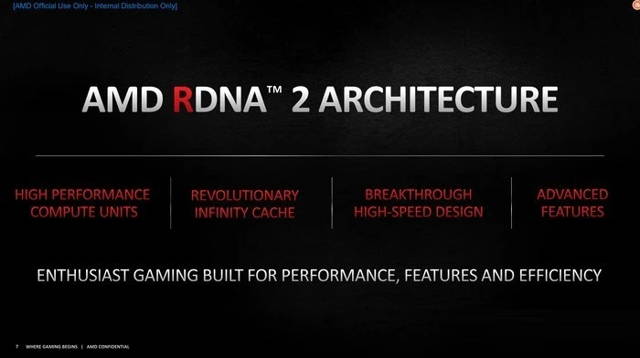 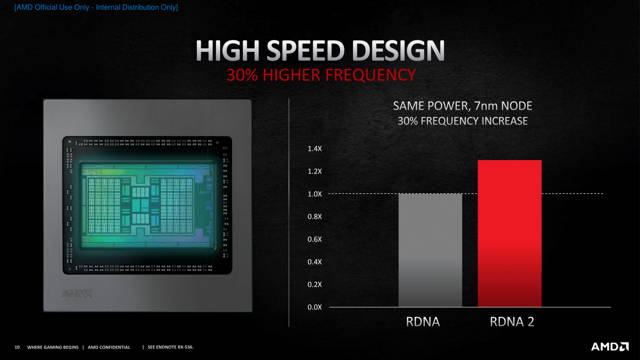 Frequency is the RX series 6000's a major upgrade. In the same power consumption under the constant and craft, AMD official claims that the new architecture RDNA 2 is 30% more frequent than RDNA. The acceleration frequency of RX 6900 XT and RX 6800 XT reaches an astonishing 2250MHz, refreshing the default acceleration frequency record of desktop graphics card. 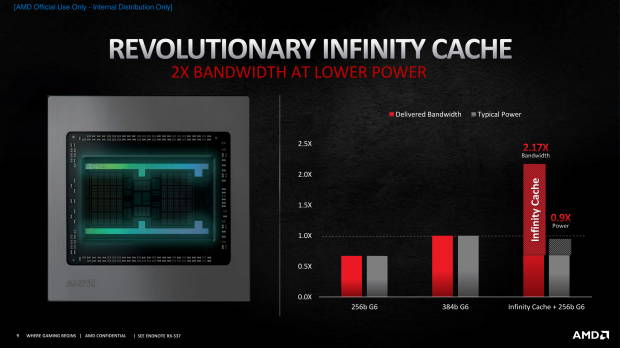 AMD has also brought a new technology: Infinity Cache. The first three graphics cards came with 128MB Infinity Cache. With the technology added, even at 256Bit wide, the bandwidth is far better than the 384Bit+GDDR6 combination.

With the new technology, AMD officials say the bandwidth will be 2.17 times that of the previous generation, and power consumption will be reduced by 10%.

The last thing to mention is memory, this time all three video cards without exception use 16GB of large video memory. Thanks to the 16Gbps video memory, the video memory bandwidth is 512GB. Although the first three graphics cards were revealed to be only 256Bit wide, such a bit width can be overwhelming at high resolution, but with the Infinity Cache above, the concerns can be completely eliminated.

The press conference also showed the effects of the ray tracing, however, due to the short event, AMD did not say much about the ray tracing, but simply showed off the video card of the ray tracing with partners. It is now known that 5 games, including Dust 5, Far Cry 6, and GodFall will be among the first games to support AMD ray tracing, according to the demonstration, I think the improvement is very obvious.

The RX 6000 series is burst in performance, meanwhile the price is reasonable. The old AMD is back.

How to Whiten Teeth in Photoshop

3 Effective Ways to Back up Your Camera Photos

How to Make Minimalist Photography Art

10 Funniest Photography Memes You Should Know

How to Shoot Stars with Phone

Why do Black and White Photos have More Impact than Color Photos?

In the post-processing of photos, the photographer will usually adjust the color, texture and other...

The stage lights are constantly changing, flickering on and off, actors moving quickly, and photographers...

Beginner's Guide - How to Protect Your Camera

Whether it is a card camera or a professional SLR, it is a very delicate...